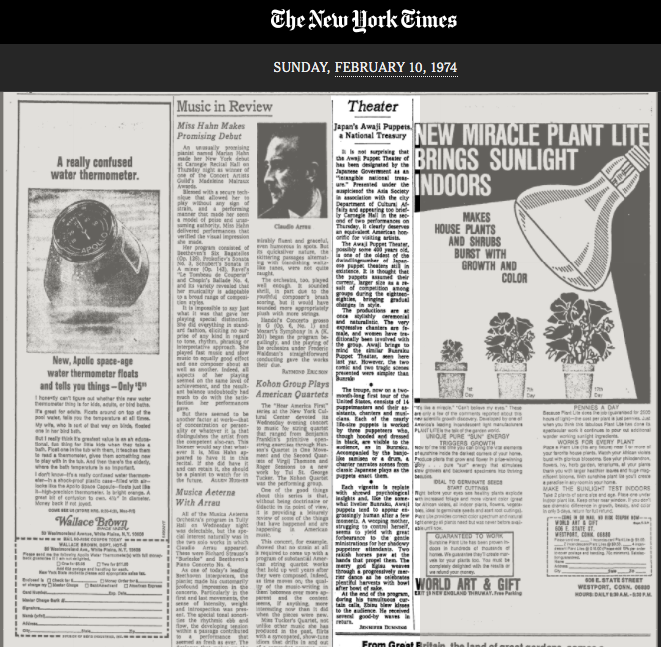 It is not surprising that the Awaji Puppet Theater of has been designated by the Japanese Government as an “intangible national treasure.” Presented under the auspiciesof the Asia Society in association with the city Department of Cultural Affairs and appearing too briefly Carnegie Hall in the second of two performances on Thursday, it clearly deserves an equivalent American honorific for visiting artists.

The Awaji Puppet Theater, possibly some 400 years old, is one of the oldest of the dwindlingnumber of Japanese puppet theaters still in existence. It is thought that the puppets assumed their current, larger size as a result of competition among groups during the eighteeneighties, bringing gradual changes in style.

The productions are at once stylishly ceremonial and naturalistic. The very expressive chanters are female, and women have traditionally been involved with the group. Awaji brings to mind the similar Bunraku Puppet Theater, seen here last yar. However, the two comic and two tragic scenes presented were simpler than Bunrak??

The troupe, now on a two‐month‐long first tour of the United States, consists of 14 puppetmasters and their assistants, chanters and musicians. Each of the nearly life‐size puppets is worked by three puppeteers who, though hooded and dressed in black, are visible to the audience, as in Bunraku. Accompanied by the banjolike samisen or a drum, a chanter narrates scenes from classic Japanese plays as the puppets enact, them.

Each vignette is replate with shrewd psychological insights and, like the some what livelier Bunraku, Awaji puppets tend to appear engrossingly human after a few moments. A weeping mother, strugging to control herself, seems to yield with great forbearance to the gentle ministrations for her shadowy puppeteer attendants. Two rakish horses paw at the hands that propel them. The merry god Egisu weaves through a progressively merrier dance as he celebrates plentiful harvests with bowl after bowl of sake.

At the end of the program, during his tumultuous curtain calls, Ebisu blew kisses to the audience. He received several good‐by waves in return.

A Modern Master's Past and Present