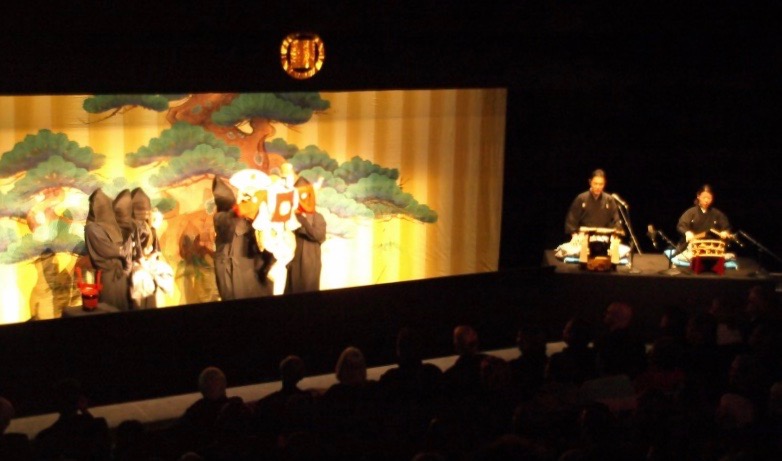 Awaji Puppet is referred to as the origin of Bunraku Puppetry, and one of the principal currents in a puppet performance tradition that dates back to the sixteenth century in Japan. Uemura Bunraku-ken, who founded the Bunraku Puppet Theater, originally hailed from Awaji Island. Ningyo joruri literally means ‘puppet’ and ‘narrative’. A puppet is manipulated by three puppeteers and performs accompany with a chanter (or gidayu) and a shamisen (Japanese three strings instrument) player on a stage. The puppets used in Awaji Puppet are slightly larger than that of Bunraku, and this allows them more dynamic performances.
It is said that, the origin of the Awaji Puppet was that among the monks who moved from Osaka and Hyogo (next to Osaka) during the Kamakura period (1192-1333), there was a puppeteer from Nishinomiya Ebisu Shrine, and he started offering puppets. In Awaji Island there were various sizes of puppet theaters from the early 17th to 19th Centurey, and not only in Awaji Island, but throughout the nation, it conveys the charm of Awaj Puppet.
Awaji Puppet Theater Compnay (or Awaji Ningyo Joruri Za 淡路人形浄瑠璃座) was foundted in 1964. Invited by a total of 28 countries including Russia, the United States, Europe, Asia, Oceania, etc., it has been highly evaluated worldwide. Awaji Puppet Theater Company is designated by the Japanese Government an Intangible Folk Asset.